skip to main | skip to sidebar

Create your own personalized photo books at Shutterfly.com. 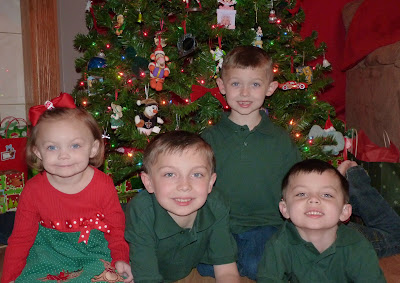 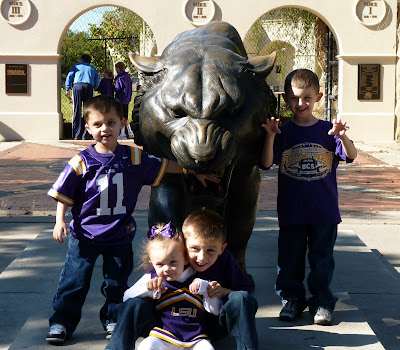 Landon's party isn't until this weekend but to celebrate today I took him to Target and let him pick out a toy. He also got to pick what we ate for lunch (Pizza Hut pizza at the Target food court with an icee), we went for TCBY for dessert, and he chose pumpkin noodles for supper. He had a blast! 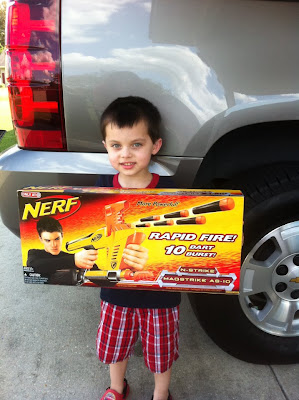 Just goes to show, kids with implants can do anything other kids can do---even play major league baseball :)
Posted by Landon's Mom No comments:

This is a great video that tells about cochlear implants. It was neat to see Dr. Graeme Clarke interviewing kids with implants and their parents. The second part lets you see some of the kids a few years later so you can see how well their language progressed.
part 1

We decided to take a break from therapy this summer. Landon is doing really well with his speech. According to the testing his AVT does, he still has a little delay, but we've both come to the agreement we think a lot of his scoring has to do with his personality. Landon does not like to just sit there and "perform". He'll cooperate for a while but after 30 minutes or so of answering the questions, pointing at pictures, and naming objects, he is ready for something else. The testing at this point is very specific-like if he doesn't have the s on the end and it should be a plural then it's wrong. His therapist and his dad and I think he is really above where he is testing-it's just we aren't able to get him to do it at that time when he needs to. The only things he is really still in therapy for is fine tuning his pronunciation--getting certain letters pronounced right. Right now we are working on F, V, S, Z, and L. He's got the pronunciation of them down so the focus now is just getting him to use it in every day speaking. Just like any typical kid, he's gotten lazy with his speech so we are trying to get him to take the time and really pronounce things correctly. Like when he says his name, instead of just mumbling it like he does....getting him to put that good "L" on the beginning so it's clear. Until you are going through speech therapy, you never really pay attention to how certain sounds should be produced. Like a "S" should be made with the tongue behind the teeth. Shelley caught both Garrett and Connor saying words incorrectly with this so we've been working on them too to get teeth together and give a good S. It's the fine tuning of these types of things that are the focus of Landon's therapy these days.
Posted by Landon's Mom No comments:

WOW!! After going to the Cochlear Celebration at Disney World we are already trying to figure out how we are going to be able to make it to Cochlear Celebration 2013 in San Diego---it was that much fun! Even though we weren't able to attend as many of the sessions as we would have liked, Eric said the ones he went to were exceptional. Landon had a blast being able to meet other kids with "ears" like his. Everywhere we went he would point them out "look, she/he has ears like me". We were able to talk with several families on the buses going to the parks, too, so it wasn't just at the cochlear events. It was so nice to be able to talk with other families going through all the same things as us. The first night there they had a welcome reception/ice cream social down on the beach at the hotel. Several of the Disney characters were there for pictures. They were handing out glow necklaces, bracelets, and flashing Cochlear magnets. All the recipients were wearing the magnets on top of the magnets on their coils. It was so cute on the kids to have the flashing lights/ not to mention how adorable it was on the elderly gentlemen and ladies :) Here is a pic of Landon with his on. 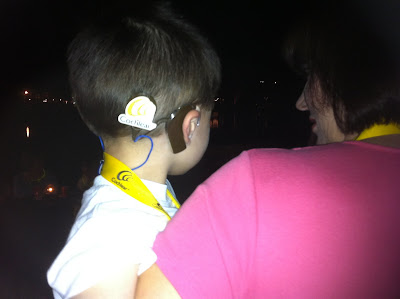 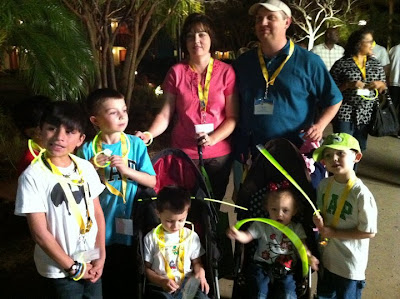 Kaci the Koala was at several of the events and the kids loved meeting him. 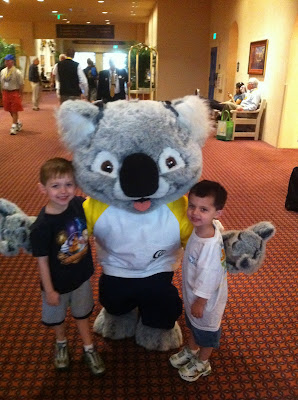 On Saturday morning they had an Expo where you could see their products/accessories and they had tables with interactive experiences. One was on therapy for kids and how to incorporate it with toys/playing. They also had a table set up for "decorating your implant". Landon loved that one. 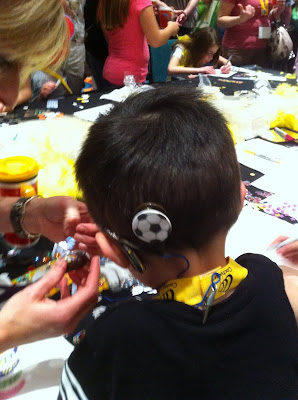 We were also able to meet Jim Patrick, chief scientist for Cochlear. He is the engineer that worked with Graeme Clark to develop the first implant. 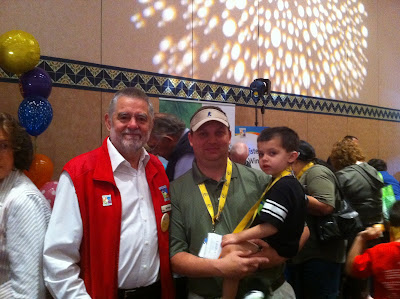 That night they had the celebration party at Hollywood Studios. Private Disney buses brought us from the hotel to the back entrance of the park and literally dropped us off on the Streets of America. First was dinner-several buffet stations were set up and the food was great. They had face painting for the kids and the arcade at Pizza Planet was open (and free) for play. Mickey and Minnie were there for more pictures. We were then escorted to the Sorcerer's Hat in the middle of the Studios for a fabulous fireworks display. The area by Hollywood Tower of Terror and Rockin' Rollercoaster was setup for a huge block party with a band playing and the two rides were open for use. 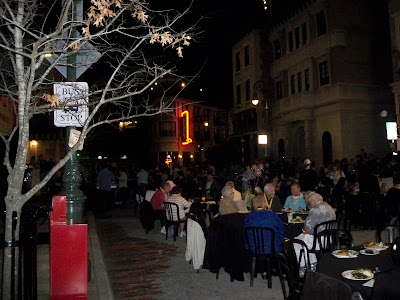 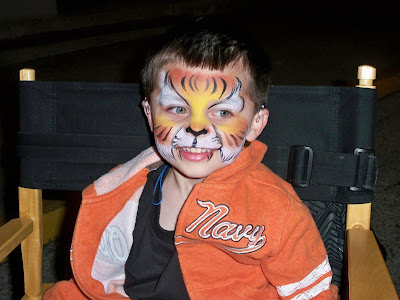 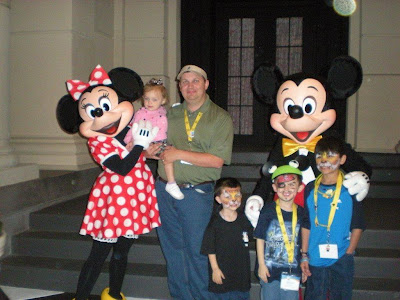 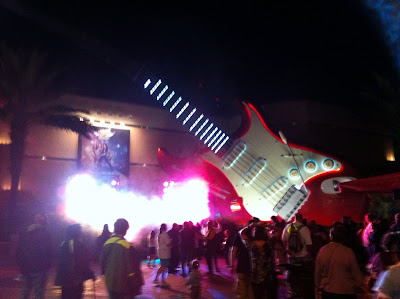 It was a great time and we can't wait to go to more celebrations! Disney was awesome as well :) We extended our time both before and after the conference so we were able to have a nice long vacation there. Of course, I still wasn't ready to leave--but is anyone ready to leave Disney??
Posted by Landon's Mom 4 comments:
Older Posts Home
Subscribe to: Posts (Atom) 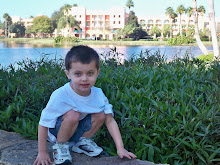